It's been quite a big week for Google releasing new apps this week. It was only a few weeks ago they released a new (and improved?) Google News app, well this week we've been blessed with two more media consumption apps from the Big G.

The first I will mention is Google Podcasts. Previously Google would have us use Google Play Music for listening to our favourite podcasts, even then, it would only work if you're in the US. The rest of us had no options. Now, they've finally released a stand alone app for us to listen to our favourite podcasts on, like AndroidAndyUK (pictured to the right) for example!

The first thing you notice is it's a nicely presented app with a neat and simple layout. At this point though, it's not just the layout that's simple, the app itself seems rather bare. You search for an app you want and then subscribe.

There are features coming though. I don't know if it's official or I've just heard a rumour, but the hope is in the future it will transcribe all podcasts and you would be able to search for a particular discussion and jump right to it. Now that would be pretty cool!

Google are hoping will generally increase the overall popularity of podcasts is their recommendation engine. I've added eight feeds in the app so far, but I don't see it yet recommending any to me. I just get lists of the top podcasts in various categories like 'Top podcasts', 'Trending podcasts', Top podcasts in comedy', 'Top podcasts in Scoiety and Culture' and more. Most of which I have no interest in.

Another feature I like the idea of is it's integration through Google Assistant. I could listen to my podcasts while driving home, then ask my Google Home to carry on from where I left off. That would be handy.

So it's early days for the Google Podcast app, but it's a good start. Whilst it will take something quite impressive to tare me away from BeyondPod, I will certainly be keeping an eye on Google's podcast offering. When the searching and recommendations actually appear, I might give it a go as my daily player. Until then, I've still happy with my Smart Playlist on BeyondPod! 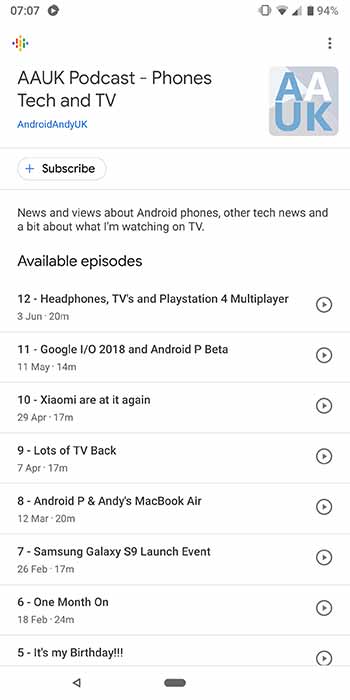 Next up is YouTube Music, which released in the US a week or so back but has also now been released in the UK. I have to be quite honest, along with YouTube Premium, which I think will be the UK version of YouTube that will allow us to watch YouTube ad free, has me a little confused. I currently pay for Google Play Music, but seem to get YouTube Music in ths same subscription. Right now as I use YouTube Music, the playlists are YouTube playlists that happen to contain music tracks, which I do have one of. I think I can then pay a few pounds more and get YouTube Premium to avoid ads, but I've yet to fully explore that possibility. YouTube Premium would also give me their YouTube Originals shows, which will work a little like YouTube. I don't think they have all that much content just yet though.

Still, lets get back to YouTube Music. It is, of course, Chromecast compatible, so you'll be able to bop along to your fave tracks on your big screen. Alternatively, you can keep it on your phone and turn off the video element, essentially making it a simple music player, just like Google Play Music.

I've already heard some complaints that it doesn't use Google Music's playlists, but then it's working off a different library, so I think that's understandable. I have heard that they will be porting playlists over though, given a little time.

One of the big plusses for many in having YouTube Music, is all those funky remixs and in some case rare tracks can be listened to, just easily as you would listen to Spotify track, with off line and background playing.

You can't help but worry Google is making their music services as much a mess as their messaging services, but then at the same time, as long as I'm only paying one subscription, then I guess having the choice of all these different apps and content can't be a bad thing... right?